The North Quest: 3 days in heaven!

For some time I am slowly losing my interest in racing. Things are not the way they used to be… But, mountainbiking is still my passion, so I have to find something new. So, what gives me the best feeling on a bike? Hmm, that must be to share my passion, to help other riders to improve, to explore, to go on adventures,… . Well, after thinking it over, maybe becoming a guide and to take groups of riders into new areas, man, that sounds like a good plan, but how, what, where? 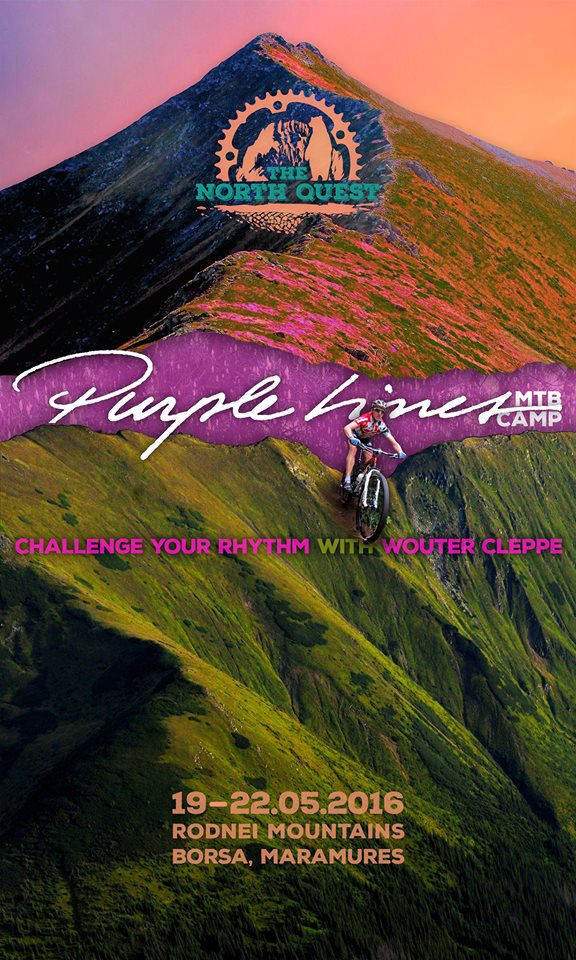 Well, it seems I am born lucky, as now my friend Robert has started this North Quest. What is that? Well, he is creating bike camps, training camps where you will be pushed physically during the dayrides, but where you can also learn something on training, food in the lectures after the rides, so a complete package for those who want to upgrade their game! And, being a good friend, Robi invited me to join and to feel this stuff from the frontline, jihaaaa!!!

After almost getting killed on my motorbike on my way to Romania when my reartire exploded at 130km/h (I guess I was taking my title of the article a little too serious) the plans had to be changed as now I couldn’t reach the camp, but Rob’s girlfriend Julia made the effort to come to Hungary to pick me up and to drive through the night to reach our destination: Borsa. Thanks a million times, you are an angle!  So, after a very short night I woke up in paradise: blue skies, sun, nice mountains (well, they looked steep), snow on the peaks, a nice group of enthousiastic people all ready to attack the hills, super atmosphere!!

Hmm, I just received a nice bag with some info papers and a t-shirt, but the papers are serious business J . I see the program of the days, the profiles of the rides, ohoooo, it looks like we will have to work for it, but, in a relaxed way, not a racing way. What a different mentality here. Relaxed breakfast where you can meet new people, checking out eachothers bikes and slowly getting ready for the start at 10.30. So far, it seems a holiday but we all saw the numbers and the profile of today, no walk in the park (well, it was as we would be riding in the national park ..)  We get going and after only 2kms, we arrive at our first typical steep hill. I realize that 25people is a serious group and that keeping everybody together would be a challenge, but Rob is just checking. He will do a first steep climb (well, actually 2) to see the level of his group. Here he will already decide what rider will be in what group later, the faster or the slower. Both groups will get 2 guides and apparently my “job”will be the last man of the fast group. The track is hard, on the limit of rideable and I think everybody must like to suffer here, otherwise you are on the wrong place ;) .  After the long climb, it’s time to have some fun, but also in the descents, there is no easy way: rocks, rivers on the track, challenging!! And sure, just when I was thinking that I hadn’t seen flat tires, I see the group in front waiting with one. Not just a flat tire, a 4cm cut! Time for me to use my racing-experience and after some time, we can all continue. From here,  we actually split the group and I take my place as last man in the first group. Next to old mines, we start our second long climb of the day and people are getting tired. But not in a bad way, they are all fighters and for them , there is only 1 thing to do, to get to the top. I get the time to talk to most of the riders and I like it! At 1650m, I start to see some snow around but as we are on the south slope, no problems so far. On the top (1750m), the views are stunning, and so its time for lots of pictures! We also know that the suffering part is over, from here only fast jeeptracks and finally a long nice descend back home J. For a long time, we stay up just above the treeline and we are amazed by the beauty of the area. Then, we have a final small uphill before we jump down, first on jeeptracks but things get more technical with every km. Trails with washed out gullies, deep ones! Fun, fun fun! All of us make it down without big troubles! From here, it was just 10min to the hotel with a great bikewash and a nice shower. After another beer, for me it was time to take a nap to recover from the short night, the stress and the sickness, but for the group there was an info night on food for sportmen (I am not one, so I slept well J ). 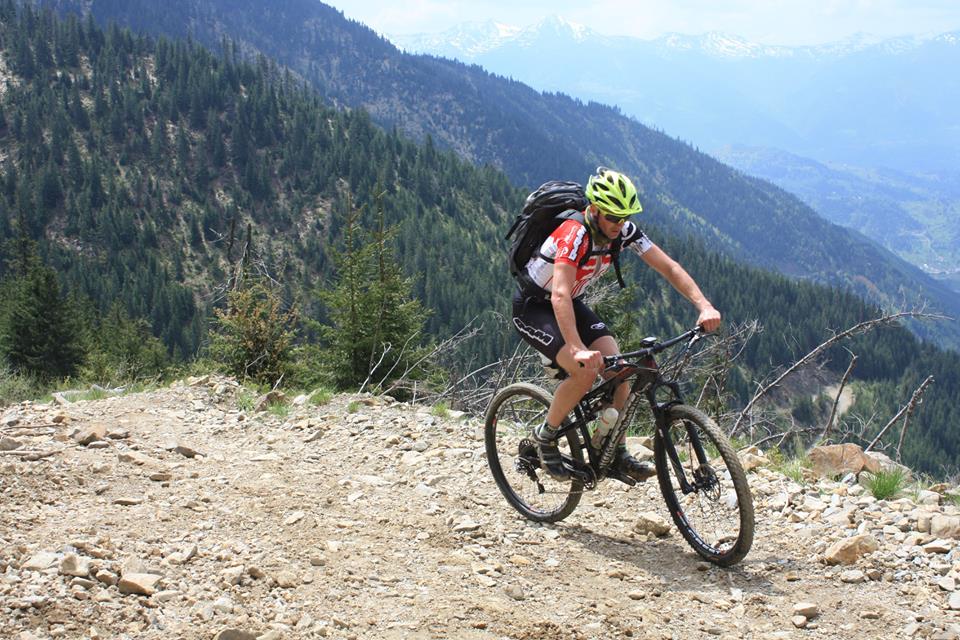 Yep, numbers are telling us something and the graph was quiet clear too: a huge climb… and a huge descent too J. So, another great day to wake up! Same great weather and today we would attack the other side of the valley, but that also ment the north slope, or the snowy side… If it would be possible? Hmm, that was the question! Today, at breakfast, Rob already announced that there would be 3 groups and all groups would have a different road. Sure, I was going with the fastest and so the adventure started. We followed the mainroad a little towards Borsa centre, before turning left and starting our job: to climb. And sure, as every road here, it was steep, steeper or the steepest, a nice variety to choose from J. But, as was yesterday, the guys were tough, sweating and suffering, yes, but complaining? No way! Every hour or so, there was a small break to get together again with the complete group, and looking at the snowy peaks getting closer, everybody was motivated to keep on going. At the second stop, a group of endure motorbikers passed us, but we would get back at them later on, when only the real sportmen (and woman) would overcome real mountain adventures. So, indeed, we reached the snow = game over for the motorbikes, but just part of the fun for us, at least in the beginning.. But finally, we also got stuck. But, to go back was not an option, so we studied the mountain and decided to go a bit down, under most of the snow and to the crest waiting at the other side. Man, that was fun! Yes, no riding, yes, carrying bikes, but you feel so good! To be able to overcome obstacles is great and so the group was complete (with icecold feet) on the crest. From here there was normally a great trail, but it became a great interval training to try to get through the snow patches. After some fun , we arrived at the start of the descent. Not easy and maybe a little crazy in the snow but o so much fun! Trails all the way till we finally reached the descent from yesterday. As now we knew the good lines on this one, we could really speed up and attack it all the way down, super!! Again from here only 10min to recovery beers, bikewash, shower, rest (or no, once again, some info night on training, but I was too buzy trying to sabotage some bikes to learn anything J ). Great night with the group, nice food and time to sleep again! 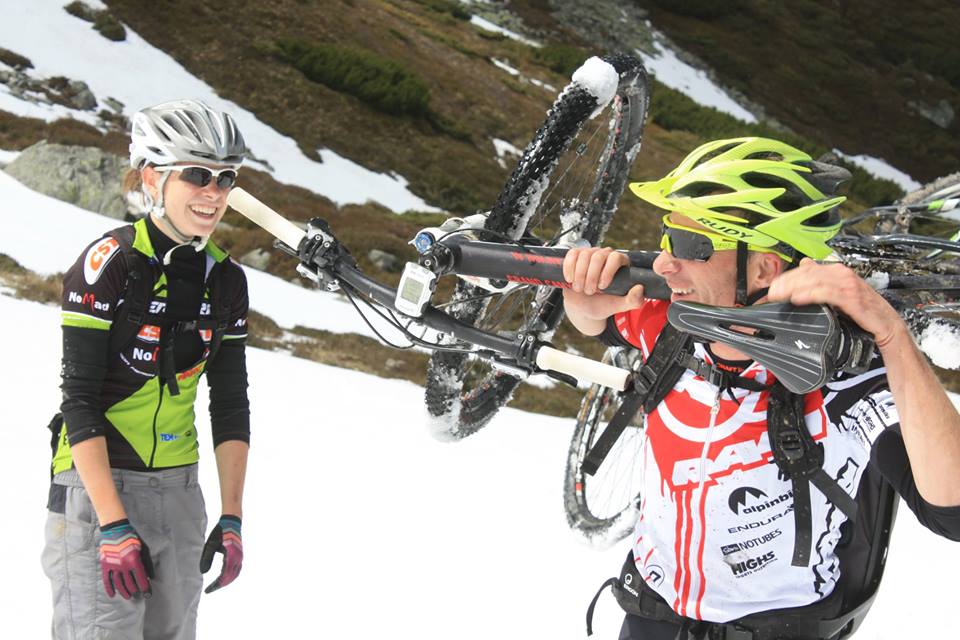 The last day already, but maybe that’s not such a bad thing? Because, after the 2 first days, I could now really feel a change at the breakfast: people were tired! So, 3 days would be enough! Enough to remember it forever, but also enough to torture our bodies J. After another nice breakfast, we took the cars this time to get 15kms down the valley. From here we would go as 1 big group to the top. The first part was a good old concrete-gravel track from the trucks from the mines, after that, stairway to heaven (or hell?) A damned steep jeeptrack taking us up in the fastest = shortest way, but for sure not the easiest! But, as usual, the group was in a good mood, and even on the toughest parts, people were still happy! The views were stunning and once we arrived at the crest, we were in the middle of 2 worlds: south we saw the snowy higher peaks from yesterdays adventure, north we looked into the Ukrain mountains with 100 different shades of grey. At the hut, we changed clothes and from here we would follow the crest for 10kms or so! Little up and down but with constant great views in all directions: a great way of saying good bye to this lovely region! At the next jeeptrack, we gathered and from here it would just be an fast track back to the start. Well, maybe some of the riders had preferred a harder descent, but I think it was perfect! As it is the final descent + the fatigue is everywhere, this was the only safe good way and it worked out fine: only some flat tires, but no crashes, no drama and that’s what we all want, right? Great adventure, but to get home in 1 piece as well… 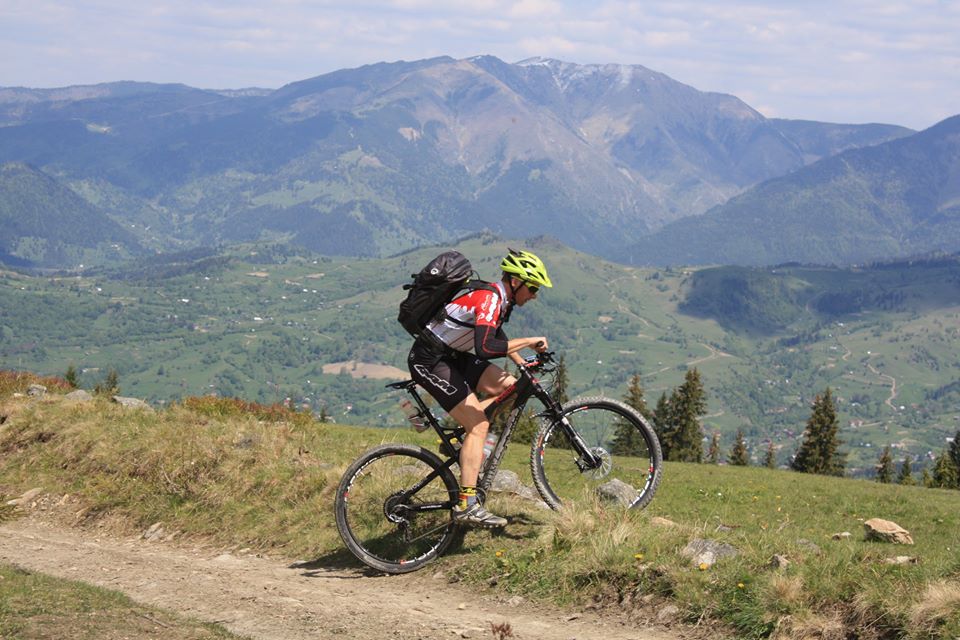 Wooow, wooooooow, amazing! I really have found a new way of enjoying the bike! Thanks a million times to Robert and Julia for showing me this, because I came home a changed person! I now know a good replacement for races and yes, sign me up for the next camp, I am in!

The whole trip was so good, so much attention to details, to make our lives perfect, I had never expected this! I guess I am used to the stage races and the contrast here is big! I had time and the energy to really absorb all the things all day long, to be able to share the moments with the other riders, to see the happy faces, well, it’s a must do, and even if this will be my next addiction, let it come, I am ready J 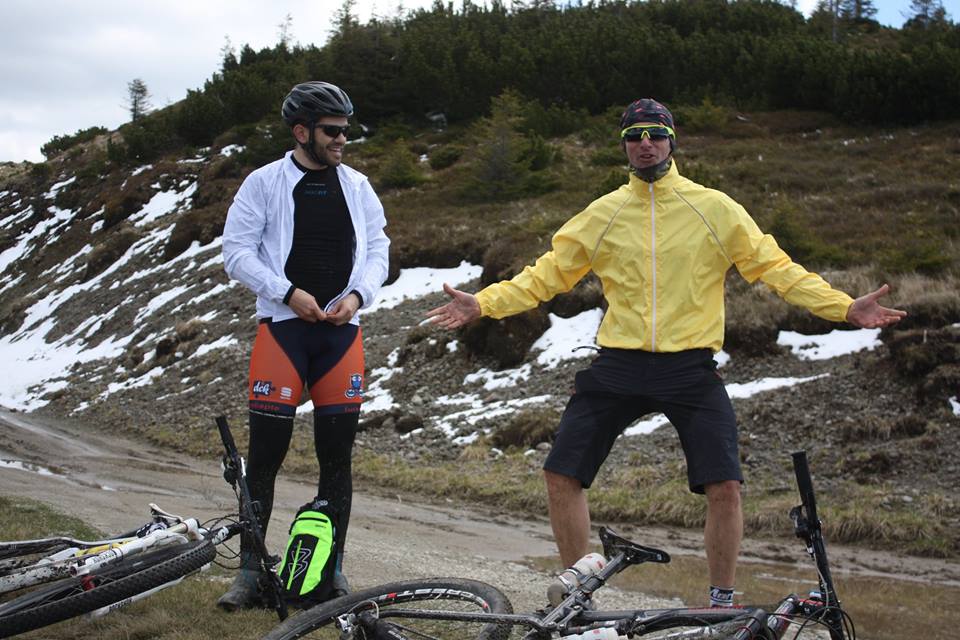 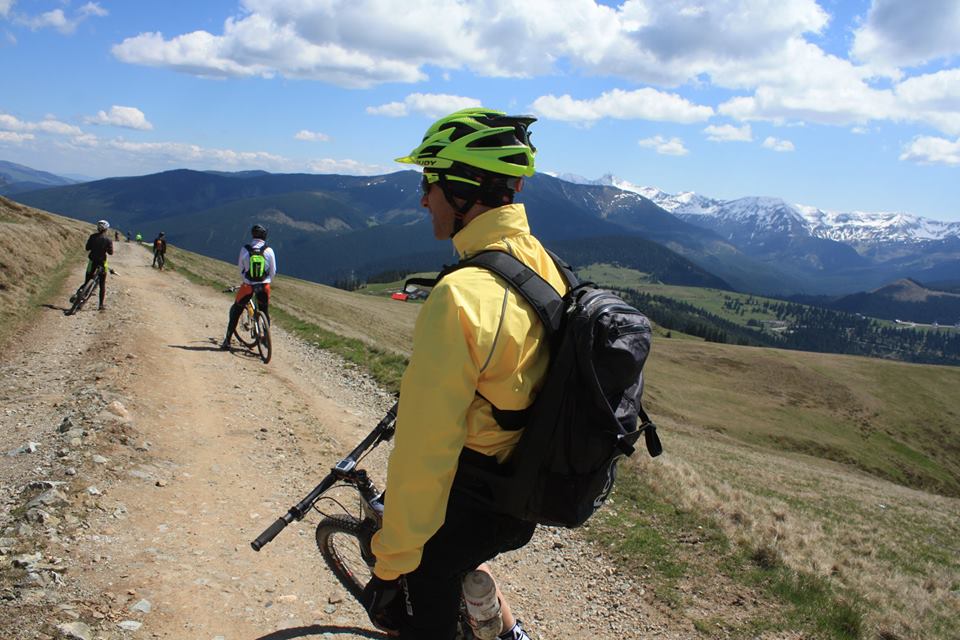 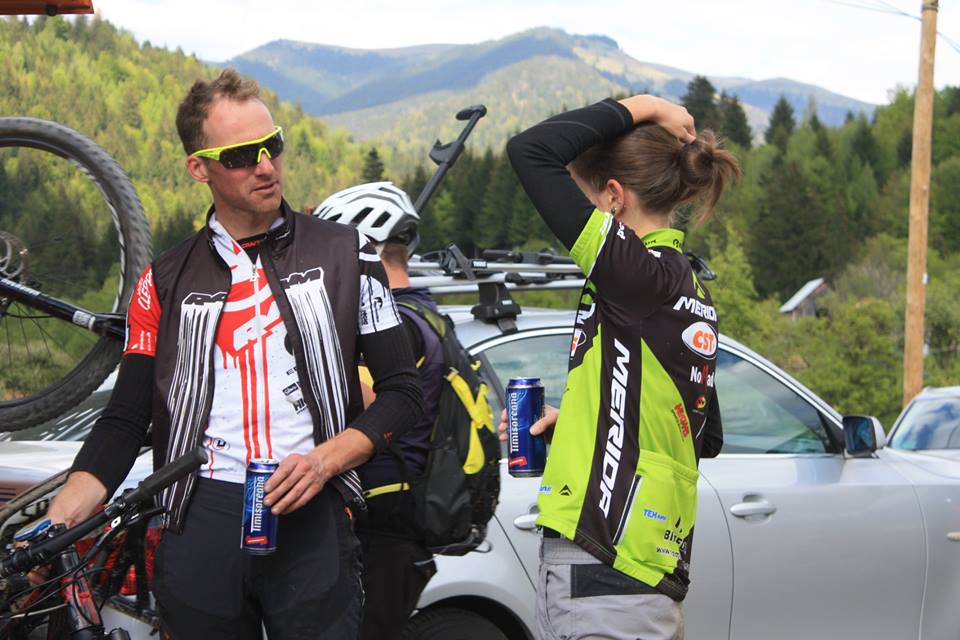