After yesterday’s adventure (Vitosha Tour), even laying down in the bed on my back at night to sleep wasn’t easy, but after all the stress and the early waking up, it worked anyway :). First thing I noticed when I woke up at 6.30 was that I had slept!! I couldn’t remember waking up during night, so that must be a good sign! I tried to lift my arm: it worked! Ok, it hurted, but I could move again! Whaaa, what a great start of the Sunday! Dani and Veronika wanted to know what was going to happen today? Racing of course! What else??? :)

So, up and in the car to drive the final 30kms to the start, Mavrovo. Mavrovo is a small skiresort in a national park in the high mountains next to a beautiful lake at 1350m altitude. But, we almost couldn’t see it, clouds everywhere… till we reached the actual town and the weathergods decided to be nice to us (at least for now…): , sun came through and we had a look at the beautifull area! At the registration-table, we found once again the nicest people!! They helped us to arrange everything and the atmosphere was so nice, so relaxed! Great!! Time to prepare the bikes, but what’s this? Oii, rain! A lot of it L. After 10min, we continued preparing for today’s challenge, 92kms in high mountain with 2600hm.

9.15, time to get going! The first km’s were on asfaltroads next to the lake, but, like yesterday, nobody was angry for this, it’s the perfect way to wake up the body, to have some small chat with the other riders, just perfect. After this, the real work started: a long climb to bring us through the beautiful forests to the empty planes on the top. But, after only 500m, it started pooring rain! It was the kind of tropical rain that normally only lasts for 1 minute, but this one stayed with us all the way! Incredible and of course, it transformed the roads to rivers, slippery rivers… But ok, once you are soaking wet, it can’t get any worse, right? So, we just kept on going. I was in the lead together with my old friend, Goran Kuzmanovski (he helped me 2y ago in Novi Sad in the Fruskagorska marathon when I broke my chain…) . 1km before the top, he slowed down and so I was alone. But, being the leader also ment that I had to navigate alone… So, on the first split, I didn’t really understand the system yet, so I waited for him. Apparentely, we would be following the fixed marks from the walking routes in the area. No extra signs were there… So, after yesterday’s adventure, this wasn’t really easing my mind. If not enough, the weatherconditions also played their game: incredible rains, ice, fog limiting view to 2m, sun and beautifull long distant views on the snowpeaks around, these conditions continued to switch during the whole race, interesting!! On the descents, I slowed down to 50% to be sure not to crash… It wasn’t giving me a good feeling at all! I was constantly scared and I was going so slow that I missed the flow, driving slow is harder than flying down, trust me!! Well, it seemed I would have to “make this race” in the climbs, but I had to slow down on every split to guess the good direction. Then I kept it slow to look back to check if Goran was still following me. But, it was so beautiful! This area is great and the track is beautiful! And, after some time, my confidence growed and I could enjoy it more and more! After 60km, I arrived in a beautiful small town, where the second checkpoint was located. On all checkpoints we had to sign of our name and while I was taking some food, the Wurth guys were cleaning and greasing my chain, waaaaw, what a service!! So, 2min later, I continued with a “new bike”. In the steep climb, I suddenly saw a rider in front of me? After this climb came the longest and the nicest descent! As I had to go slow, no chance to get any closer to the rider… After this, I could see him in front of me , but it took ages to get any closer, who was this guy?? He was good!! And I was happy to see him, it motivated me to keep the pace. Finally I was close enough to recognize him. It was Goran!!?? How the hell was this possible? So I sprinted the final gap to him and started talking… It seemed he had missed the checkpoint in the village, cutting of a small part of the track… Bad luck for him unfortunately L. We rode together and we worked well on the remaining asphalt kms. Yep, asphalt.. The last 10kms of the race is on the road, and this is the only point that still has some room for improvement. Yep, sure, it means that the race will become harder, but that’s mtb, no?? Now, the rain and ice came back on us and it was so bad, I had to take my jacket. I was blue when we reached the finish! But happy too! I had been able to make the race, to spend great time in the most beautiful area, well, that was a lot more than I ever had hoped for yesterday! And I won as well!! So, what can be better? Now, it was time for social life, food and drinks! I found Veronika (who had won the short distance race!)in the resto and we had a good time waiting for Dani. But, what happened? Time was passing, no Dani? Finally, he appeared. Seemed he found this tour too easy, so he went to seek for some more adventurous trails, punctured and had a great time repairing tires in icy rain J. Most important, he made it and –although he was also blue from cold- he was smiling! 3 Happy riders!!!

Yep, another crazy weekend and after 911km driving home, 3 zombies are sitting here now, somewhere in Budapest :) . Time for resting and doctorvisits, hope to see you soon on the trails! 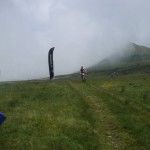 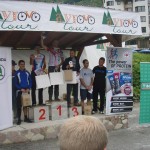