Last weekend was a special long weekend, so I wanted to spend it with the family. But, to keep some balance ;), I organized a combi-weekend with swimming and culture on 1 side and a good marathon on the other side. As the location of the race -next to Miskolc, in the Bukk national park- was new to us, it was the perfect reason to get out from Budapest for another adventure. Also, I really needed this race as I had received another prototype bike from RAM-bikes, a full suspensioned carbon 29-er this time. I had built it on Friday and I would take it into an ultimate test -without even testriding it- in this race. Well, perhaps not the smartest way, nor the best, but for sure the fastest way to find the perfect setup. J

Sunday, 10.30, time to start the race. Man, it was hot! Over 30degrees and that is a lot for me! But ok, I have survived the Bulgarian summers, so I should be fine here… When we were called to the start, I noticed that not a lot of people had come for this race.. Why?? I could’t understand… The organization was great, the loop perfect, a cold beer for everyone that crossed the finish, man, super!! Anyway, I was happy to be here!! So, neutralized start behind a car for the first km and then we started for real. It was immediately up and I took the lead. O, o, ooooh, well, yep, position of the saddle was wrong! The moment I went to 100%, I felt pain in the legs and I knew I wouldn’t be going flat-out today… Well, why not to stop and to change it? Sure, sounds logical, but although I felt it was wrong, I had no idea how to correct it… So It would take a couple of hours to realize exactly where the problem was and how I would fix it… And that’s why I like a race as a test… Sure, you can lose the race because of this, but you get real usefull data! Ok, so, first climb, I was in the lead and I heard people staying with me , but I didn’t dare to look back, I could only give it my best and hope. Finally, we reached the top and we jumped down to the first waterpoint. From here we had a little asphalt and Gabor Fejes closed the gap to me. Now, we had a long descent and I went full speed. Both to test the suspensions as to try to get away from Fejes. It worked, but in the next climb he almost came back to my wheel. I wasn’t pushing too hard in the climbs as my legs locked up, but I knew I was faster in the descents and so that should at least make Gabors day a little harder ;). After 15-20km, we got out from the woods into the burninghot fields. The track was fast and very bumpy, so I was very lucky with the rearsuspension. Opened it up and kept on pedaling like a fool… But, surely it had to happen, in the last part of this field, the grass was over 50cm high, making it impossible to see what was underneath. I was thinking about it when it already happened: the bike suddenly jumped into a gully while my body-balance was in the other side. Result: big crash. I decided to let go of the bike and to make a nice roll, but at 36y old, somehow you feel this more painful… But ok, some small scratches, no damage on my new bike and so, I continued… I came to the 2nd waterpoint, but I was still ok and didn’t stop. (I had 1.5l High5 isodrink with me) Now came the second big climb of the loop, but in open field, man, I was burning… Nice good suffering, but then I realized I had to do this all 3 times, aiaiaiai, and it would only get hotter… After this overheating, we jumped back into the forest for some more nice fast singles back to the finish. Lap 1 was over… 2 to go. In the first climb of the 2nd loop, I started to hear my chain making funny noises. I always carry chainlube and I decided to use it at the top of that climb. But I never got that far as all of a sudden my frame started to move sideways… Oh no! Did I break the frame? Luckily not, it was 1 of the bearingpoints that had come loose. Typical things for a first ride and yep I also have tools with me to solve these things. I screwed the point back into correct position + checked all other pivot points. Ok, lost some time, but I felt confident again for the rest of the ride. On the first waterpoint, I took 1 cup as I would try to make it to the 2nd point to make a full refill. The descents became more fun, faster as now, I knew what turns were coming, but it wasn’t boring at all! It was great fun. Before I knew it, I was back in the fields and here, I went slower J. On the second point, the planned refill + lubing chain and praying for a cloud to give me some shadow in the hard 2nd climb. It wasn’t there ;) . But ok, drinking was the message and from here on, I stopped everywhere, at the finish-start, waterpoint 1 , point 2. Everytime 750ml!! The third loop was without big surprises, till after the long descent around km 65. Again, something was knocking on my frame and I tried to localize the problem.. Aha, another typical one: the bottlecage came off. So, stopping again to test my Lezyne tool once moreJ. Immediately, another rider stopped to ask if he could help, that’s the spirit!! Real bikers mentality!! After 1min I could continue again to enjoy the trails for the last time. By now, I also had a good idea of what was wrong with the position and so I was happy to see the finish after 3.5hrs. And then I got an icecold beer, whaaaaa, the best reward I could think of!! Super! With the startnumber, I could get another beer + nice goulash-soup, I love this!!So, great race, great test for the bike and a great result: well, can’t be a bad way to spend your Sunday, no??

See you next time, Wouter 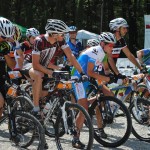 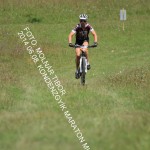 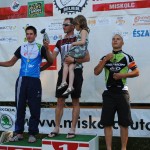 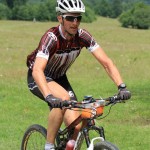 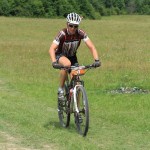