So, after yesterdays warming up ;) , today we were going for another ride, but hoo, what happened to the weather? Pft, too early, too wet, too cold, hmm, to be honest, I didn’t want to go but then I have good friends who will always help me suffer more in my weak moments, thank you Boyko…So, loading bikes in the rain in Sofia at 7.30 (Boyko, Philip and me) but the further we got to the east, the better the weather became, so, it was a good call after all. In Stara Zagora, things were like yesterday, hot and dry! Same place of the start as all the past years and so a lot of good memories came back! And for my shape, well, yesterday for sure opened my lungs a bit and I did sleep last night, so, it should be better or so I hoped.Around 10.15 we started and as the first kms are pure single tracks, I put myself in second position behind Alexander. Great way of waking up-warming up and the pace was perfect! When the first steep hill came, Alex accelerated to 100% and i… pulled my foot from the pedal again (luckily I was sitting, so no saddle issues) and so I lost the speed and I had to leave 50m. But before I could shift down, I heard a big bang and yep, another schwalbe evolution went to heaven… Mine? No, I am on Maxxis Ikon exo protection, a lesson learned in my 4y Bulgaria… It was the rear tire of Alex = game over… So, no more race as now I could just pedal away from the others and repairing a big cut is close to impossible, so I knew Alex wouldn’t return. (??!!) I tried to go to training mode, enjoyed the trails and started dreaming. A little too much as sometimes I really had to remind myself to speed up, realizing it was still a race after all. In the forests halfway, my gps told me left, the signs right and so I started doubting. After a while, I decided to turn back and to check again to be on the safe side… It was right onto new trails, super! So far, the track had been improved with more trails, better signs, so all good!!! Also, waterpoints with happy helpful people, so, thumbs up! Now, I arrived in the last part of the track with the fast jeeptrack where some years ago a lot of holes were digged and where we all got the same tattoo from a branch next to the holes.. This time, it was safe to go fast. At the end, when I turned left into the forest, I thought I heard somebody in the descent and that was possible with the turning back and the dreaming, so I shifted up to my 100% speed. Breathing was still hard, but I pushed to my limits. Was fun and after only some minutes I arrived at another waterpoint at high speed. They guy asked me if I wanted water, but I decided to continue, although I couldn’t make out what direction I had to go. So, I went straight and indeed, I saw the markings in the steep descent just 50m after the waterpoint. I kept the pace up to the finish to get some training done. When I just crossed the line, the organizer told me I had cut off 2kms of the track and after explaining, I understood the guy from the last waterpoint should have showed me the direction, but with my speed (and my perfect Bulgarian), things went wrong… I guess I was far enough ahead that this unfortunate mistake wouldn’t have changed the result and so I stayed 1st, but I had to move to master category as a punishment to leave the pricemoney to the real riders J. Well, I never chose to make a shorter loop, I usually only ask for longer races, so I don’t feel like I made a mistake. I do think that better signs could solve this issue, maybe a big sign before the waterpoint to explain the split between short track and longer one would be perfect (as was the rest of the signs). So, I left with some mixed feelings, but anyway, what I remember most is to see the friends back, and to have a nice ride on great track in perfect weather! What can I ask more for?

Now it’s time for some more rides with friends, see you soon, 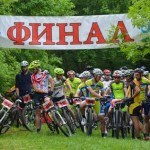 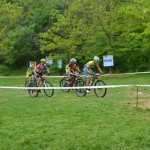 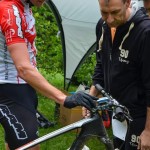 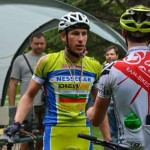