X-mas cup cx Bekescsaba: how nice to end the 2014 season with a win 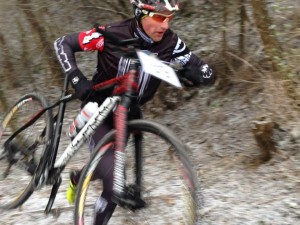 28 december, a great winterday and a race on a good track? Time to go and see!! I think it was in Bekescsaba that the last years national championship had been organized and I do remember the way people described me the track: technical, difficult,… , fun! So, after feeling sorry for missing this race last season, today was the day to make up for it! Ok, it’s not close to Budapest and as usual, I would have to drive alone, but after 2.5hrs of driving and  listening some good CD’s, I was more than happy to discover this race!

It was easy to find the location and outside in the cold, the organizers were waiting the riders to register fast and easy. Big parking, nice house with hot showers to change and wash, helpful people, perfect! Time to jump on the bike and see the loop. Woow! This promised to be an interesting day! Apparently, it must have been a muddy track yesterday when people were training on it, but now, overnight, it had frozen stonehard and so the track was dangerous with a million frozen 5cm deep tire-lines. So, even the straight lines had become a challenge! A little bit scary, because a crash ment pain for sure… But ok, the more technical part with all the small descents and ascents were so much fun, that I forgot about the risks… So, as promised by my friends, a very nice interesting loop indeed! And the organizers had done great efforts in making it great: they had been constructing stairs with wood, or they had digged out the stairs in the hard soil, nice job!! In my second testloop, things suddenly confirmed the dangers of this loop when I blew my reartire in one of the small descents. I still don’t know how I did that, but ok, it was a lesson to be very carefull in the race. After walking back to the car and putting and pumping the tire back on the gold rim(I love Notubes J ) it was time to get to the start. And as if the weather-gods knew it, it started to snow. This snow would make the track even more interesting, creating a kind of ice on top of the frozen mud… 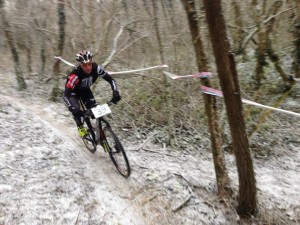 13.00, time to roll! I completely missed the start as I still don’t understand Hungarian and I didn’t hear anyone count down, but ok. Apparently, the people were very motivated, because when I wanted to shift to the front, I was pushed back hard. But ok, no stress, and in the first section with 2 stairs, I managed to get to 4th position. Now would come the dangerous  straight line and here I went to the lead. I decided to pull hard and to see how the others would react and how they would go in the technical part and the end. I didn’t have time to look behind, but I guess it was Szilard who stayed with me. In the slippery technical last 700m of the loop, he perfectly managed to follow as I expected, because as proven before, he is a skilled rider! So, I realized, I had to make the race in the straights and I didn’t like that, they scared me, a crash would be fast and hard, my bones are too old for that.. But I am a racer and so I went fast! Now, only in the second loop, I suddenly realized I had lost him? I don’t know why? Perhaps he switched bikes? Perhaps he also saw the risks and decided to play safe? Anyway, I was gone and so I could start to enjoy the ride. But enjoying doesn’t mean going slow, nono, that’s not the way I was made: I like the speed, I like the edge, to go on the limit. But, with conditions only getting worse, I received some serious close calls and warnings and so, eventually , I had to slow down. Traction was disappearing with every minute and so I was happy to get to the finish after 56min without problems.

Now, time to recover and to take a great hot shower. Perfect! No dirty bike because of freezing temperatures, nice shower, hot tea, good atmosphere and big prizes, what can a man ask more for from Santa??

Thanks to the organizers for giving us again a great day! I will be back for sure!!