Another racing weekend, another victory! Ivan Kolev dominated the field in the Mega Enduro Mountain Hill 2015. The only mass-start megavalanche-style event in Bulgaria spans over two days of practice, qualifications and the big final on sunday. The riders had to battle it out on a 20+ kilometer race course that goes all the way from the top of the mountain down to the city of Troyan. It’s a brutal course – it’s no fun going against the clock and about 60 other riders here. There are lengthy climbs and pedally straightaways which, which really weared you out when ridden at race pace. While we wouldn’t call this track technical it was easy to make big mistakes as it featured several high-speed rutted out sections with a mix of sharp pointy rocks and scary babyhead size loose ones. For the most part the track is wide enough to overtake others, but there were several single-track sections. including a new man-made trail near the finish. The qualification was held on an entirely different track up near the top . It was only several kilometers long, but featured lots of loose rocks, steep sections, dusty corner and ruts, plus a couple of not very pleasant uphill sections – one right after the start and one near the bottom. Both tracks required serious endurance, fitness and skills – it was going to be an interesting race! The RAM Team had three riders participating – Anton Nastev, Bobi Krumov and Ivan Kolev – who were all able to deliver a good result here. After a couple of training runs on the big course on saturday our boys were ready for the sunday challenge. First they attacked the track for the qualis, one by one – all of them ended up on the front row, with Ivan posting the fastest time on the qualification stage. Then we moved back to the big 20+ kilometer track – it was time for the finals! The organizers arranged everybody in the starting grid according to their result in the qualis and off they went! Ivan Kolev was on fire and took the lead early, keeping ahead of the pack for the entire race – not even a bad crash in one of the gnarlier sections of the track managed to unsettle Ivan and he finished in first place way ahead of everyone else! What a beast! Anton and Bobi both had high hopes for doing well in this race (Bobi won it last year), but their optimism was quickly deflated when they both got punctures in the final. Disappointment for them but good team vibes in the end – a win for RAM rider is a win for the entire team! 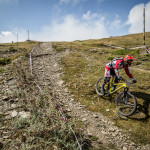 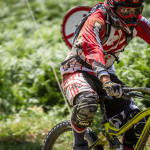 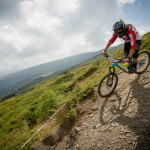 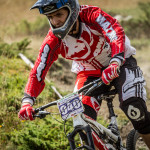 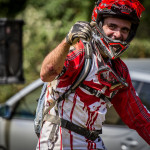 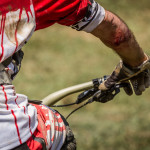 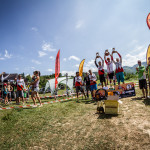