As I told you on Friday, I decided after a very succesfull cyclocross winter, to step up, to look again for a bigger challenge, to make my life harder and to try to become a “real cx-rider” with a real cx-bike.  The idea is to put a roadbar and roadshifters on my RAM xc race, but, as I don’t have the parts for that right now, I thought to start the test already now with the Scott. So, after about 1 year of not using the addict cx, I started to ride it again, first on the road (1week), to find a good position (thanks Victor for helping me to get a better riding position), then, a few days ago also off-road and for that I was so happy with my Notubes products! As I don’t have racing cx wheels anymore and I don’t want to abuse my new American Classics, the Notubes valves, rimstrip and latex allowed me to convert normal wheels into tubeless wheels and after 2 succesfull tests, I had good hopes that the tires would survive the hard beatings in the race… and they did!! Sure, it wouldn’t be only the tires in this first test, it would be a bigger challenge! A good position on a roadtrip doesn’t mean perfect position that you need in a race. And to be able to feel confident on this funny roadbar on the road, well, there are no technical steep sections  there, so…  And cornering with a complete new bike on new 31mm tires, well , it’s just different, it would take a couple of minutes to know the limits. And if this was not enough, I also had to survive the 750gr jump in the wheels, the rotating mass… I had to come from the incredible super 1390gr Notubes Gold wheels to a 2200g shimano training set. If you can’t imagine what this does, try to put 400gr heavier tires on your wheels and go for a spin, you’ll get it J.

So, Saturday, the champs:

I arrived in time at the stadium, because after last year, I learned starting times could change here last minute… So, time enough to see the loop and to feel if my Notubes Raven semislicks would be sufficient. The loop was 95% the same as last year and conditions were good. 1.6 km loop, 4minutes, 5times of the bike to jump or to take stairs, yep, nice ;) …  Sure, some mud, but if you adapted your style a little, it wouldn’t be a problem.

12.30, No counting down, just go! I was in 4th position in our small group, and after 200m, we had to get of the bikes for the first time and I realized immediately that , if I was going to take cyclocross more serious next year, that it also ment I had to start training this hopping on-of the bike because, once again, I saw that I lost time here. I will book some trainingsessions with my teammie Buzso for this J. Anyway, as usual, Fejes was getting away and so I started to push hard. And now the funny thing came, well, funny, hmm, it wasn’t… Fejes was getting away and as I tried to push harder, it only made me slower… Because, I was making mistakes!  Almost sliding away in turns as I didn’t know the limits, almost crashing in a descent with the new bar still surprising me, losing the bike in the mud,… , scary moments but nothing really went wrong, I only lost more time. So, after only 2 loops, I knew this was mission impossible and what did I expect anyway? I had just sabotaged myself big time! So, now I could concentrate on what I had came for: the new bike, riding style, position, tires and pressure, etc. Sure, I had hoped to stay closer to Fejes, but it is what it is and so I made it a personal timetrial. The more tired I became, the better I got used to the bike and so I tried to keep constant times on the loop. And, I found some nice surprises too: the bike wasn’t too scary. I think that coming from a xc bike with fixed fork to a cx bike, it’s ok as I have already learned to absorb the shocks  with my body and so I didn’t feel the bike as “dangerous” as I remembered. The brakes, hmm, well, still an issue, but I have a plan to put mini v-brakes on it, that should solve this problem (or at least give me more control). The tires, incredible! First I went over their limits in an effort to take mtb-style on them, but later I saw how good they were and how fast I could corner them, I like them! Just need to lower that pressure, because the small bumps kill my back (+ to tilt the saddle a mini little..)

So, a hard day, a hard lesson, but I enjoyed every second!  I didn’t crash, I had a good time to test the bike, to get used to all the new details . Now, time to clean the bike, change position and settings a little and hope that the today’s experience will already help me tomorrow. 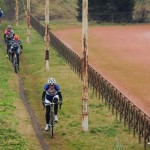 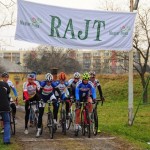 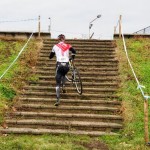