Supercross nr 4: Salgotarjan, despite of some technical problem, still able to win this roadrace

Last year, I was sick in this time of the year and so I missed this race. Afterwards, people told me I missed the best race of the season: mud, great climbs, big stairs, technical parts, … and so I was determined to make it in 2014. But, now it seems that the organizers have changed the loop… and they changed it from the 1 extreme to the other as what I found now was a roadtrack L. Completely flat, 50% road, no technical parts, but, I also have to admit that from all the 2014 cx races I have done so far, I was the happiest to have my RAM xc race here! Why? Well, the longest roadsections were on very rough gravel roads, or what remains after the asphalt is destroyed. It was a huge risk for the wheels, I don’t speak for the tires anymore as I think that if you flatted here, you would also destroy the rim. So with my mtb notubes gold wheels, I had a wider rim, tubeless setup and about 1.5cm more tire before the stones would reach my rims… (sure, my opponents are using now tubulars, also solving the issue…). Anyway, after I tried the loop, I was convinced that this would become a hard day as I could see anything really favorable to me, more to say, I saw a lot a stuff where I am really no good at, but hey, that’s racing, some tracks you like, some you don’t… 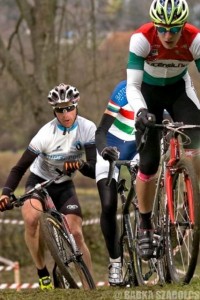 13.00, time to test our machines. For once, I didn’t miss the start and I got to 4th position. That was before the pushing started. When people get so close to me, I usually make place for them as I am used to marathons and here the starts are more relaxed and you will have 4-5hrs to get your position back anyway.. But now, I lost 3 positions before I realized I had to fight harder. At this moment we arrived at the end of the long stretch and I pushed back to 4th position before turning onto the cartingtrack. I was behind Fejes and I considered this the perfect position. Now I could relax and study the turns and the speed of the group. On the way back, I was happy that my top speed on the 34-10 (my biggest gear) was enough to follow and once we arrived on the pools, I felt that the speed wasn’t very high. Were the guys studying eachother? Nobody wanted to give it a try, to attack? Well, knowing the 2 long straights, probably everybody understood that attacking was suicide, as you would stand alone against the group (5 people). So, 1st loop went rather easy, and also 2nd was ok, but in the start of loop 3, there were some troubles… I think Rozsa made some mistake in the last turns before the long straight making Fejes to hit his brakes and so I passed him and went into 3rd. When we arrived on the asphalt, 50m later, Rozsa slided away and I had to react fast to go around him when he crashed. There was a small gap to Buzso, but I decided this was the moment to go to full throttle and I made the jump. When we arrived on the carting track, I saw we were only 3 left: Buzso, Szillard and me. So, when we hit the straight on the way back, I decided to take the lead to make sure we were gone with our small group for sure. Once at the pools, I kept on pushing and I realized I was getting away? ! So, I checked again and I saw that now all of us 3 were riding solo and so I decided to give it a full loop of maximum power to try to get away as no more “group”would be chasing me. And that worked! After only 1 loop, I had a nice gap and I could start concentrating on just riding good lines, keeping a good pace. But, in loop5, troubles started, as I suddenly noticed my seatpost was lowering. What? How can that happen? Well, ok, if it would get too extreme, I could make a fast stop in the technical area to fix it, so, no stress, just keep focused and warn Veronika in the Tech-zone to keep an allen key nr 4 ready for me. Every loop was becoming crazier, but it was ridable and I wasn’t losing too much time, so I continued. By the time I was in the last loop, the saddle was more than 4cm down and it was like I was riding my daughters bike, but I did it, I was winning! And, on this track, I had expected a highspeed roadrace with a sprint at the end, so being alone from loop 3 made me so happy I didn’t care too much for the bad sitting/riding position.

So, I did it again! 4th victory in 4 completely different races, it makes me happy! I think that by now my body got used to this short tortures and that it has adapted, it became stronger, because for sure I have surprised myself here today! Once again a big thanks to Dani and Veronika (Alpinbike) for a great weekend and also to Viki for the help on the race-day!

Looking forward to the nice loop in Ballasagyarmat next Sunday, see you there! 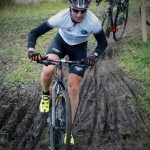 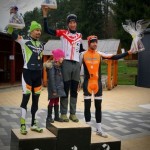